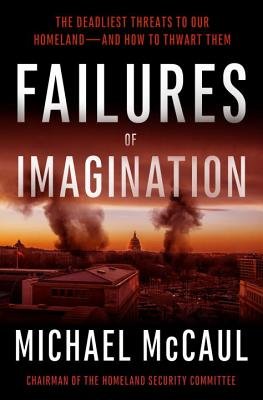 “From the Chairman of the U.S. House of Representatives Homeland Security Committee, a gripping look at the most dangerous and unexpected threats to our national security—and the actions needed to protect us.

America’s inability to foresee the September 11, 2001 attacks was deemed a collective “failure of imagination.”  Our political leaders and intelligence professionals failed to anticipate the wide-ranging and unorthodox threats to the nation’s security.

Nearly a decade and a half later, imaginations in Washington D.C. are still failing……

Congressman Michael McCaul has spent years in Washington watching the Obama administration ignore or dangerously underestimate the most pressing threats to the country.

Now in Failures of Imagination: The Deadliest Threats to Our Homeland—and How to Thwart Them, the sitting chairman of the Homeland Security Committee, who receives daily intelligence about threats materializing against America, depicts in real time the hazards that are closer than we realize.  From cyber-warriors who can cripple the Eastern seaboard to radicalized Americans in league with Islamic jihadists to invisible biological warfare, many of the most pressing dangers are the ones we’ve heard about the least—and are doing the least about.

In this compelling and action-packed narrative, McCaul outlines realistic scenarios that could inflict more damage on the nation than any attack we’ve yet faced.  He then explains how our vulnerabilities were created, why our enemies are actively contemplating them, and what we can do to solve them before it’s too late.”

Failures of Imagination was an interesting book, as it was written by the chairman of the Homeland Security Committee, giving personal insight into the threats faced by our country. The scenarios given in it are very believable and detailed, and I enjoyed the explanations to each attack given by the author, who would know personally what he was talking about.

Each chapter was set up in a similar manner — a detailed scenario of the attack, which read like a novel, usually told from the perspective of the “bad guy” in the story, a report to the president of the United States spelling out the damage and the actions that had been taken or were being instituted, an explanation given by the author explaining the threat, what had happened, if could really happen in America, and lastly a section on what we as Americans need to be doing to defend our homeland from such an attack.

That being said, I can’t say it is my favourite book on political issues I have ever read. There were parts of it that just seemed “dry” and it took awhile for me to read through — I have had the book for several weeks, and am normally a fast reader, but it has taken me about four weeks to finish it.

I also had issue with the language used in the book. While I understand the author wanted the scenarios to be believable, I feel that he could have written a “clean” book and it still be just as enjoyable and detailed….I have actually read many books with no language on the same subjects dealt with here. There weren’t many instances, but I did keep a pen beside me to mark out words.

This would definitely be a book for an older reader who was interested in government political issues — some of the attacks are too detailed for younger people. Nothing too graphic, just the amount of detail given makes it REALLY suspenseful — which is one thing I did enjoy about the book.

All in all I would give this book a 3 star rating.

*I received a free copy of this book from Blogging for Books in return for an honest review.
I did not have to agree with or like this book*

*Affiliate links are used in this post…..thank you for using them =D*

What are your thoughts? Cancel reply