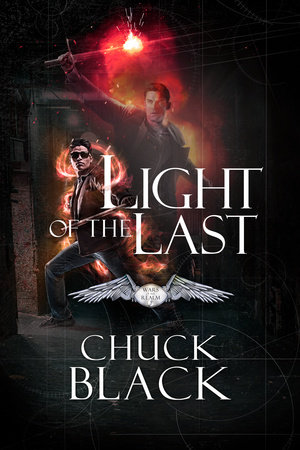 “After an accident left him temporarily blind, Drew Carter didn’t just regain his sight. He now sees what others can’t imagine — an entire spiritual realm of mighty beings at war.

Forget the gift, Drew just wants his life back…When he’s offered a chance to become a CIA agent, it seems a way to redeem his past. The only problem — his visions of the supernatural realm are only increasing in frequency.

It’s up to the warrior angel Validus and his…team of heavenly agents to protect the unbelieving Drew…The angels must use a millennia of battle experience to keep Drew alive, for the fallen want him dead.

….Drew’s faced with an impossible decision that will forever alter the destiny of America…and his own soul.” ~ Excerpt from back cover

The third book in Chuck Black’s Wars of the Realm series is an action packed, fast paced book that will keep you on the edge of your seat. It’s plot is full of twists and turns that will keep you wondering what will happen next. In the beginning of the book you are told how it will end — and the whole book I was trying to figure out how that was going to happen =)

This book picks up right where the first two left off — with Drew going to prison. You quickly reunite with all the characters from the previous two novels — Jake, his mother, Sydney, Reverend Branson, Validus, and all the “dark” and “light” warriors — as the story unfolds of how it is up to Drew to save America.

I appreciated how real all the characters were in the book, and how you could sympathize so readily with them. Instead of just being names written on paper, the names became people in your mind. You could feel their fear, cry with them, and celebrate with them.

Theology wise I enjoyed the strong Christian worldview that was expressed. There were a few things I didn’t agree with: There was a statement made that a person has to find God on their own, because of man’s free will. I believe that man, who is sinful and vile, can never desire salvation or have faith in Christ by their own will, and that Christ must draw us to Himself. Our own wills are contrary to everything that God is.  “Ye have not chosen me, but I have chosen you, and ordained you, that ye should go and bring forth fruit…” ~ John 15:16 “No man can come to me, except the Father which hath sent me draw him: and I will raise him up at the last day.” ~ John 6:44 “So then it is not of him that willeth, nor of him that runneth, but of God that sheweth mercy.” ~ Romans 9:16 “For by grace are ye saved through faith; and that not of yourselves: it is the gift of God…”~ Ephesians 2:8 There was another statement made in the study guide that God reveals Himself to everyone at some point and time, and man must choose to follow Him. Again, I disagree. I believe God has elected some to salvation, and some to eternal damnation, and all for His own glory. “But we are bound to give thanks alway to God for you, brethren beloved of the Lord, because God hath from the beginning chosen you to salvation through sanctification of the Spirit and belief of the truth…” ~ 2 Thessalonians 2:13 “Having predestinated us unto the adoption of children by Jesus Christ to himself, according to the good pleasure of his will…” ~ Ephesians 1:5 “In whom also we have obtained an inheritance, being predestinated according to the purpose of him who worketh all things after the counsel of his own will…” ~ Ephesians 1:11 “Hath not the potter power over the clay, of the same lump to make one vessel unto honour, and another unto dishonour? What if God, willing to shew His wrath, and to make His power known, endured with much longsuffering the vessels of wrath fitted to destruction: and that He might make known the riches of His glory on the vessels of mercy, which He had afore prepared unto glory?” ~ Romans 9:21-23

All-in-all I would give this book a rating of 4.5 stars, and I would definitely read it again! So far,it has been my favourite in the series :-)

*I received this book from BloggingforBooks in return for posting an honest review….I did not have to agree with or like this book =)*

*Affiliate links are used in this post….thank you for using them =D*

What are your thoughts? Cancel reply